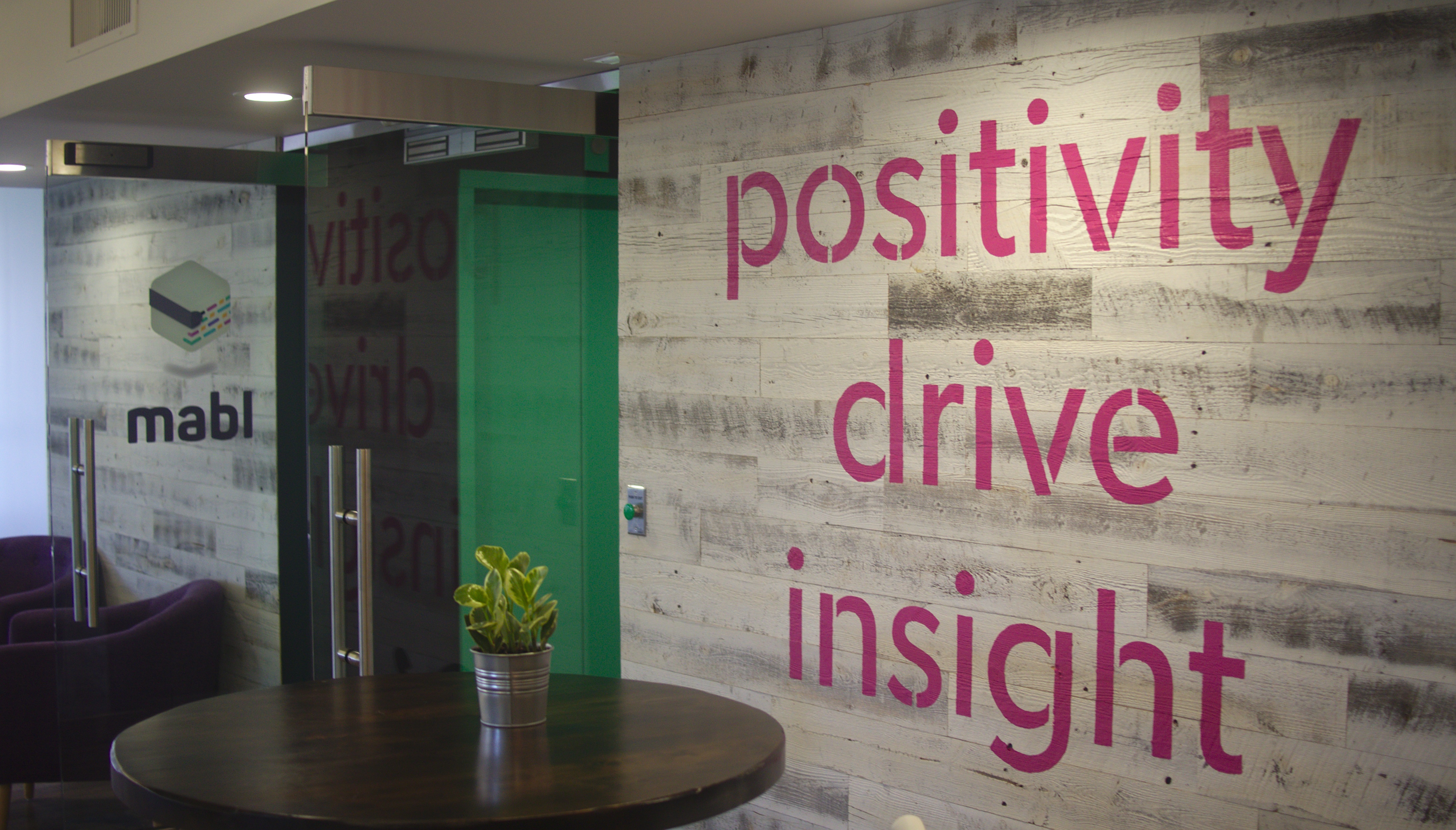 It seems I read something about culture in the tech industry almost daily. Those articles use modifiers like “healthy,” “toxic,” “collaborative,” “bro,” “innovation,” “hostile,” “inclusive,” and more depending on their angle. There is a lot of interest in the face of some prominent dysfunction and imbalance.

Culture was important for me in the search that brought me to mabl. I had some specific cultural characteristics I was looking for, but culture is a very individual thing. Defining it is hard, so much of it boils down in practice to what would allow you to be content and fulfilled. Figuring out what that means for you and how to identify it presents a challenge.

I’ve had several people express an interest in how I went about my search for culture, so I thought I’d capture it. Maybe you like the kind of culture I do. Maybe how I went about it can help you formulate your own approach. Maybe you like what I found at mabl so much you want to join us. Your mileage may vary, but I hope you find this interesting or useful.

I’ve served in a wide range of roles in tech, not always in an obviously logical progression. I’ve been self-employed almost as much as an employee. Last summer, I left my previous employer where I had been Director of Agile and Director of Engineering to pursue my own startup idea. My agreement with my wife was that after six months I either had to get investors or get a job. After deciding the market timing wasn’t right for my idea, the job search commenced.

I went through several exercises to refine what I was looking for. I used things like personality tests, reflective exercises, and conversations with executive and career coaches, friends, and former colleagues to really clarify my target and how to identify it.

I figured I needed to know myself in order to find the right situation. And that’s not a one time exercise. I had to adjust my target as the search proceeded. In the course of interviewing, I saw things I liked and disliked. I had to be in touch with my feelings about each opportunity and couldn’t be afraid to say no. I think that these principles are universal, regardless of what you’re looking for.

Here’s how I described my target to recruiters and interviewers:

I’m looking for a company with cool technology. I’m not interested in <certain types of businesses> unless <things that make some of them different>. My primary target is VP of Engineering or CTO of a company with an engineering staff of no more than 40. That number is a ceiling, not a target. In a company that has differentiated VPEng and CTO, I’m more of a VPEng. But there’s a caveat.

A very close second priority is good company culture. If the company culture is healthy enough, I’m fine with a lower title. My reason for wanting the VP level is to have a seat at the table with the people making decisions that shape the culture, not to build an empire. I don’t need that seat in a company where everyone’s voice is considered.

For culture, I’m looking for a place with clear vision, that is driven by outcomes over output and deadlines, that has high degrees of team autonomy and trust, and that practices direct and honest collaboration and communication.

As in any job search, several companies rejected me. I turned down two offers – one for lack of sufficient growth opportunity, one because of cultural signs – and rejected several other companies at all stages of the process. I also stopped working with a couple recruiters who didn’t listen to  my cultural criteria. When I received the offer from mabl, I withdrew myself from consideration from two other companies, one that had given verbal intent to provide an offer and another that strongly seemed to be moving that direction; the preparation I had done gave me the framework to clearly and quickly choose between opportunities.

I also usually requested shadowing days when discussions got near offers. Uncharacteristically, I didn’t feel the need to do this with mabl, but more on that in a moment. It’s easy to paint a good picture of yourself and of a company in interviews. It’s much harder to do so during an entire day of candid observation and participation. As much as possible, I would even ask to work with the teams. I took refusal or conversion to more interview sessions as a red flag.

So why did I find an offer from mabl so compelling? I found that mabl covered almost all of my criteria.

First, let’s address the easy part. Cool technology. AI-driven software testing. Check! No need to say more about that except that it fit really well with my >background. I’ve worked on continuous integration and testing tools several times. I’ve presented at several testing conferences and meetups. I have a lifelong career goal of improving how software is created.

Now let’s talk about the culture. It was clear throughout the interview process that culture was deliberately important.

Dan clearly communicated a deeply thought out vision from our very first conversation. It’s hard to convey all the signals concisely, but that vision was complemented by a humility and experimental mindset that is perfect for iterative product discovery. I did not detect the all-too-common hubris that he thought he knew precisely what the product would look like. That initial read has proven accurate. While there is no shortage of opinions and ideas, everyone appreciates that we need to see how they play out with real people.

Mabl is a “no titles” company. Even the co-founders, Izzy and Dan, just talk about what responsibilities they cover rather than label themselves with titles like CEO and President. I’m sure there are titles on some corporate filings somewhere. You’ll also see basic titles on LinkedIn; they require it. This is more than a gimmicky lack of formality. It frames how people interact with each other.

Internally, people are respected for the skills and experience they bring to the table, and there’s a basic assumption that everyone is a thinking, reasoning adult. This may seem like table stakes, but I’ve worked at and seen places where that’s not the case. Some companies only listen to and respect employees for what the company thinks it hired them for. In other places, the conversational tone defaults toward assuming someone didn’t think before speaking. These are just two examples.

We guide our work by the value we deliver. No, we’re not yet to beta, but our engineering team and people who have signed up to the early access list are already using the product for testing production apps. We plan the functionality we’re going to deliver. We break things up into iterations, but they’re not strictly fixed in length. Iteration details change as we discover new things. As we close in on the end of our initial iteration, we discuss whether to extend it to finish more sprint themes. Along the way and at the end, we use the product ourselves and have product and usability validation as feedback. We don’t estimate other than to ask ourselves if our plans seem potentially reasonable and achievable in a couple of weeks.

All too often, companies use deadlines to “motivate,” ignoring the variability inherent in knowledge work, especially when breaking new ground. They also confuse delivering stuff with delivering value, but that carries a large arrogance that you know what users want, will delivery it perfectly, and do not need to gather feedback and iterate.

For each iteration, we break into teams of two to four who are expected to deliver the value they’re focusing on across the whole stack. Each team decides how to achieve its goals and reviews them with the larger group. Beyond that, we trust each other to have the right conversations and to execute with the right balance of speed and professionalism. Individual and team creativity account for the majority of  plan changes along the way. Everyone feels vested in their results.

It’s probably apparent that I’m very happy with my decision to join mabl and their decision to hire me. I feel like I found a place that practices and embodies the kind of culture I was looking for, one designed to foster creativity and great results. There’s more to it than I could possibly capture here, but I hope you have a sense of the healthy and stimulating culture I believe we have at mabl.

If this sounds like your kind of culture and problem domain, we’re hiring engineers. Feel free to connect with me on Twitter, LinkedIn, or by e-mail if you’d like to know more.