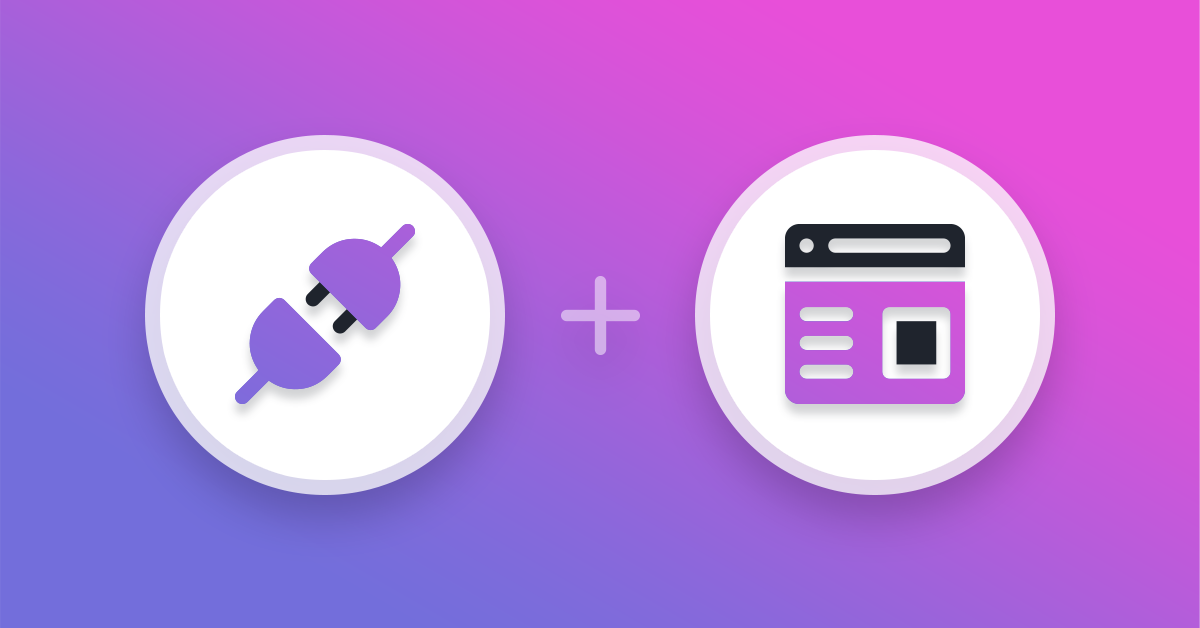 Application performance is an essential aspect of non-functional quality, especially when it comes to ensuring a top-notch customer experience. Failing to identify performance regressions before they impact users can have substantial implications on the business, such as revenue losses, increased maintenance costs, and user dissatisfaction. However, running performance tests can be time-consuming and expensive, and still result in performance issues slipping into the later stages of development, where it takes more time and effort to resolve them.

Mabl's unified test automation platform is designed to help teams maximize the value of the UI and API tests into which they’ve already invested significant time and effort. The low-code test creation process helps teams quickly improve test coverage, and mabl’s test orchestration capabilities enable teams to schedule cloud-based runs or trigger test runs by specific deployment events in their CI pipeline. All of these cloud runs, which include unlimited parallel executions across multiple browsers, generate a treasure trove of data about the performance of UI elements and API endpoints.

The new mabl features leverage this data to generate performance insights: UI tests now include speed index for all web pages, and API test results show the response time for each API endpoint. These new reports are generated with no extra effort from mabl users. Users simply execute their regular test runs, and mabl automatically generates the insights for the entire team.

The highest view into these new insights can be found on the release coverage page, which gives an overview of the readiness of each new release or app version. These reporting features highlight any performance changes that may need to be investigated.

At the top of the page, a new widget flags browser and API tests with the worst performance degradations in the most recent release, as well as overall trends in average app load time and API response time. 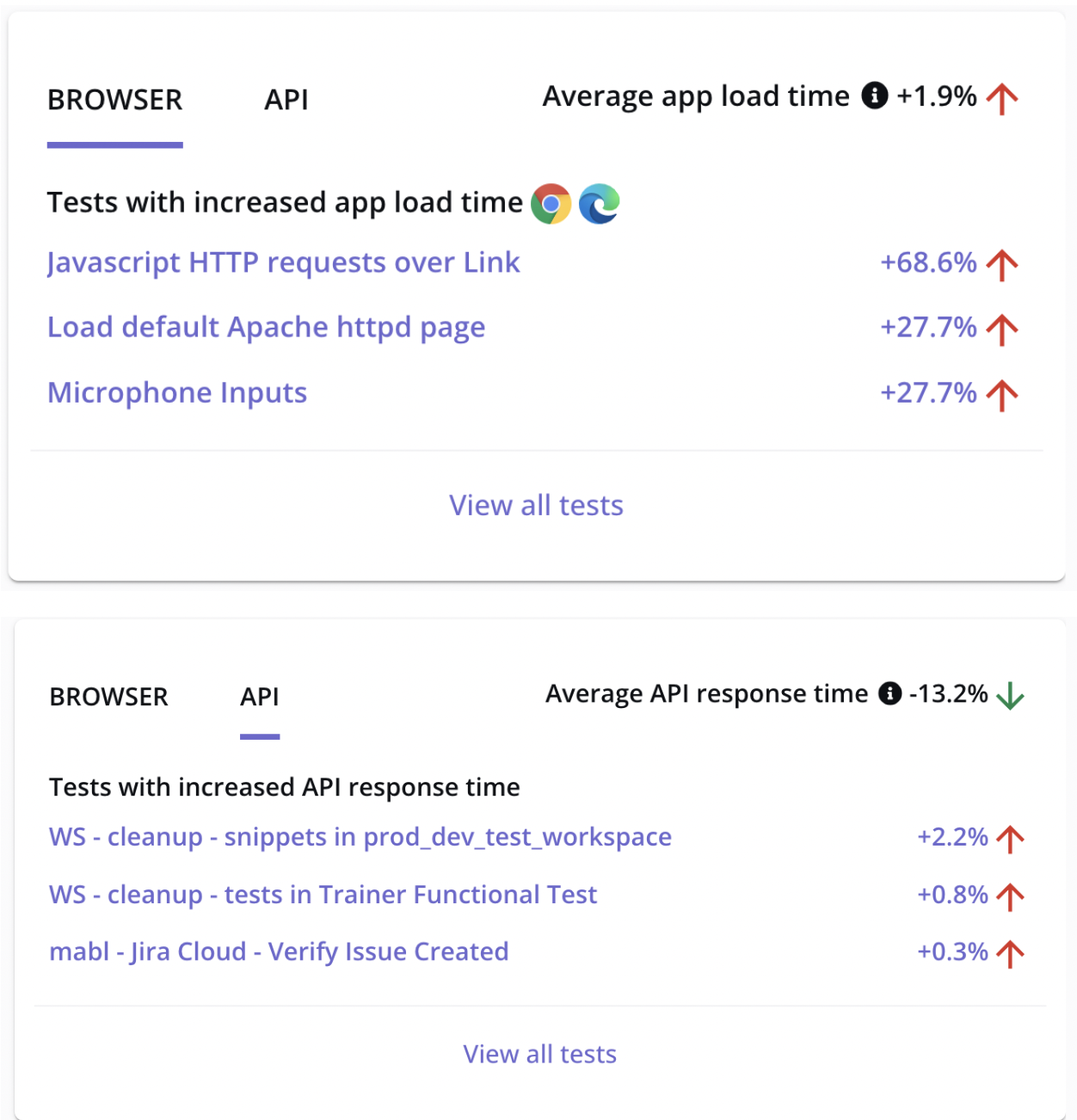 Mabl users will also see a new column in their Test Status table, which shows the cumulative change in the speed index or API response time for each test. This allows any user visiting this page to quickly understand performance changes at a glance for tests that cover specific user journeys. 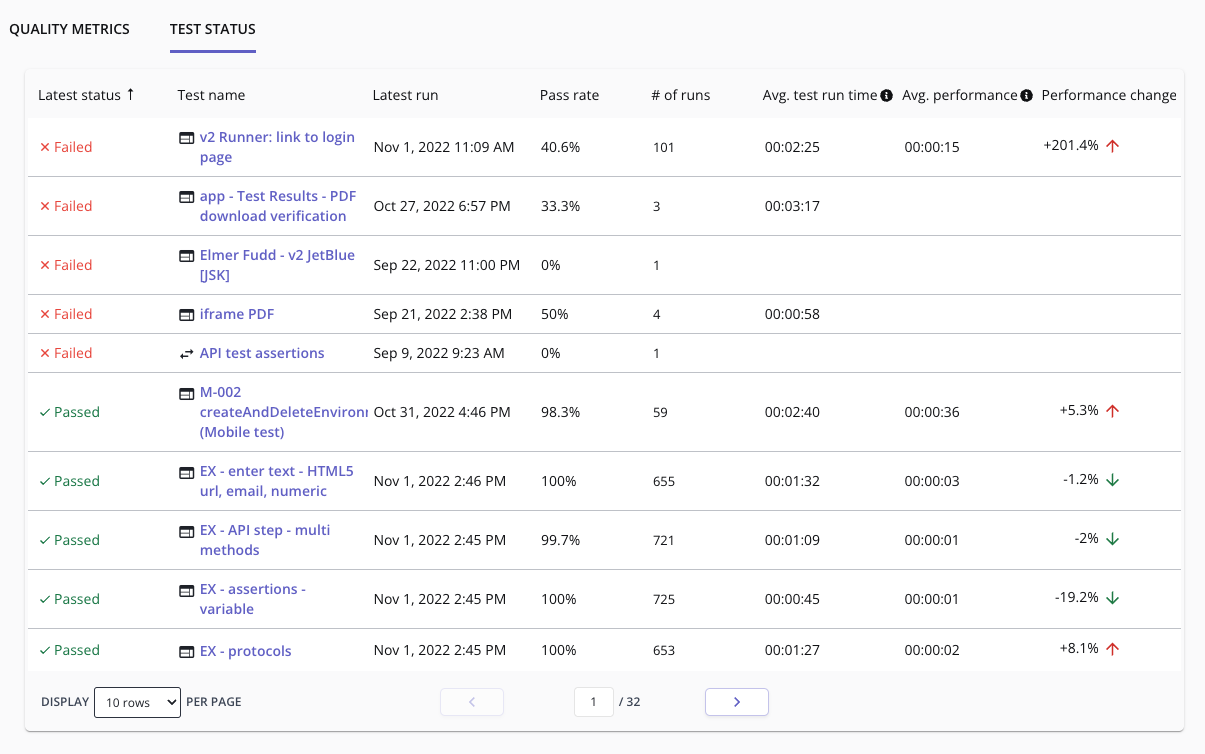 If users identify any concerning performance degradations in the release coverage page, mabl easily allows them to get detailed performance history for specific UI and API tests. For example, a QA team member responsible for a specific high-traffic user journey - such as purchase or engagement - can quickly investigate the test for that user journey to understand if the problem is real and where the root cause may be. This includes ruling out if it’s an API or UI issue, accelerating the time to resolution.

For example, the image below shows a mabl Plan that includes API tests (on Stages 1 and 3) and a UI test (Stage 2). Within the Plan view, users can quickly see the overall duration for this plan over time: 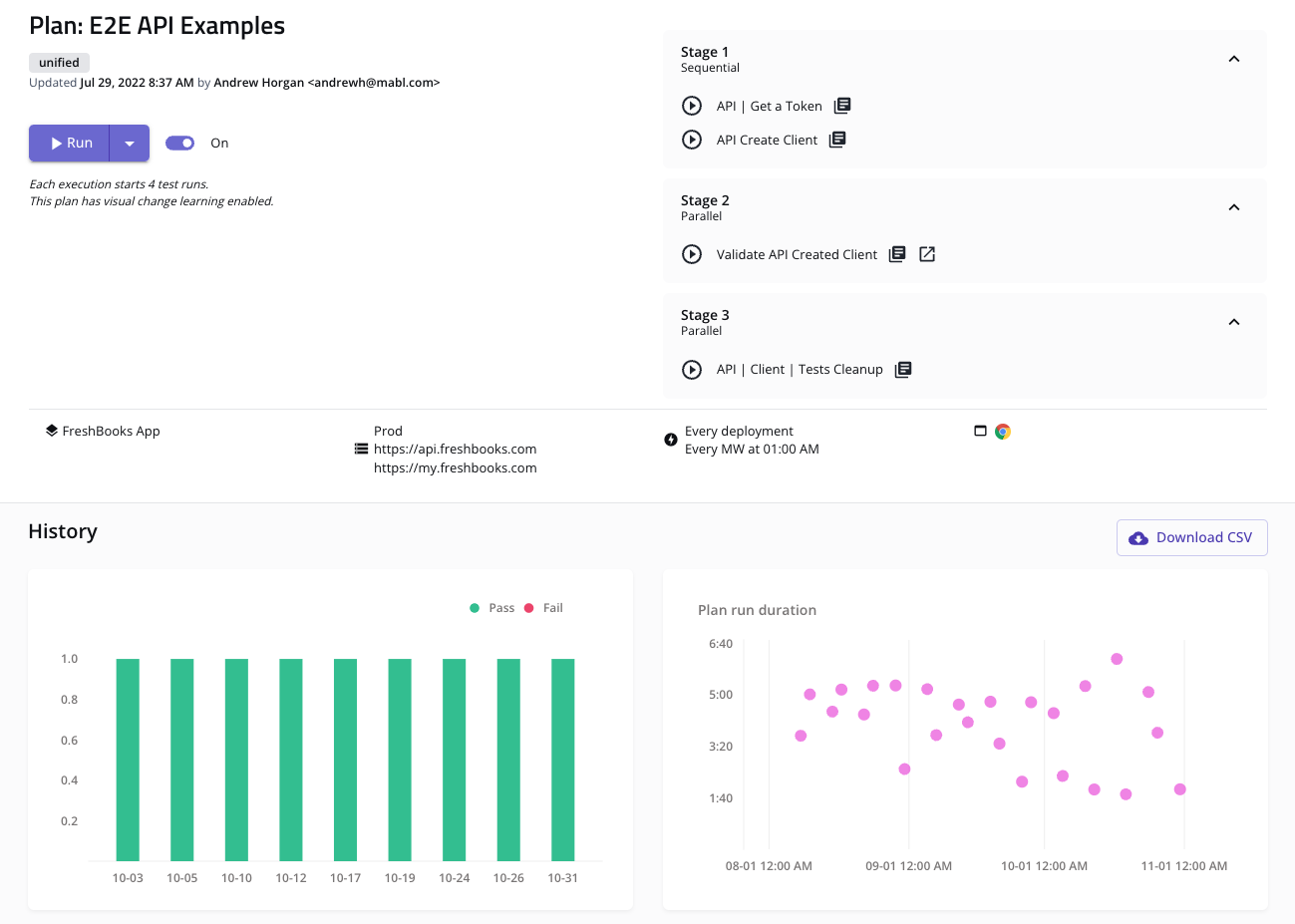 Selecting any of the tests - say the UI test in Stage 2 - shows the details of that specific test with a dedicated performance tab that illustrates trends in app load time and test run time. This gives quality teams a more granular view into the performance of each specific step of the user journey. 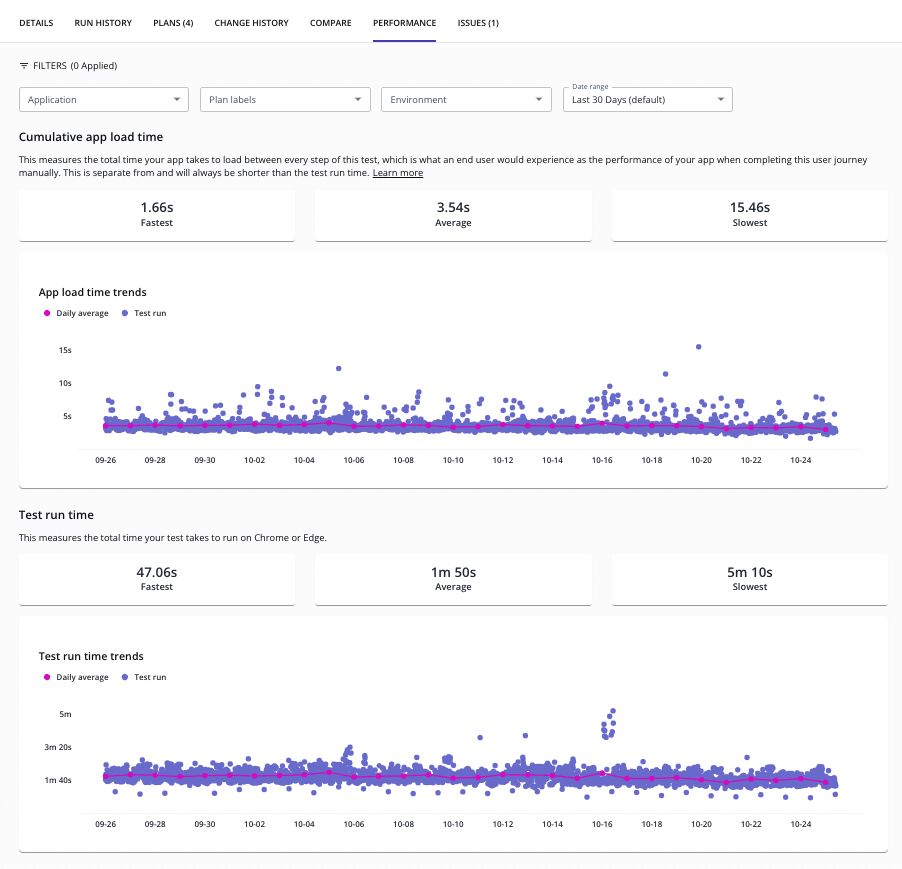 If the QA team finds that a specific test run deviates from the normal range of performance, they can easily investigate further by getting comprehensive data on each test step, including the speed index trends for that specific step over time: 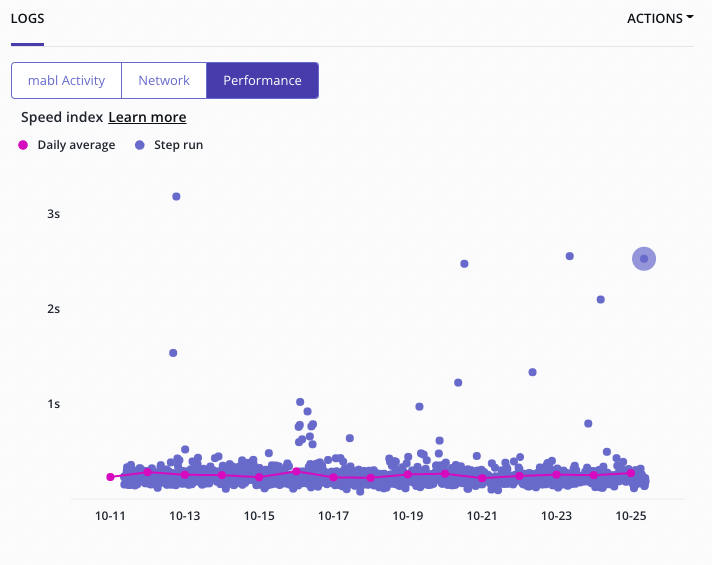 Similarly, mabl allows users to ensure that APIs that impact the customer experience are also performing as expected with a similar set of API performance reports and drill down capability focused on the API response times - see an example below: 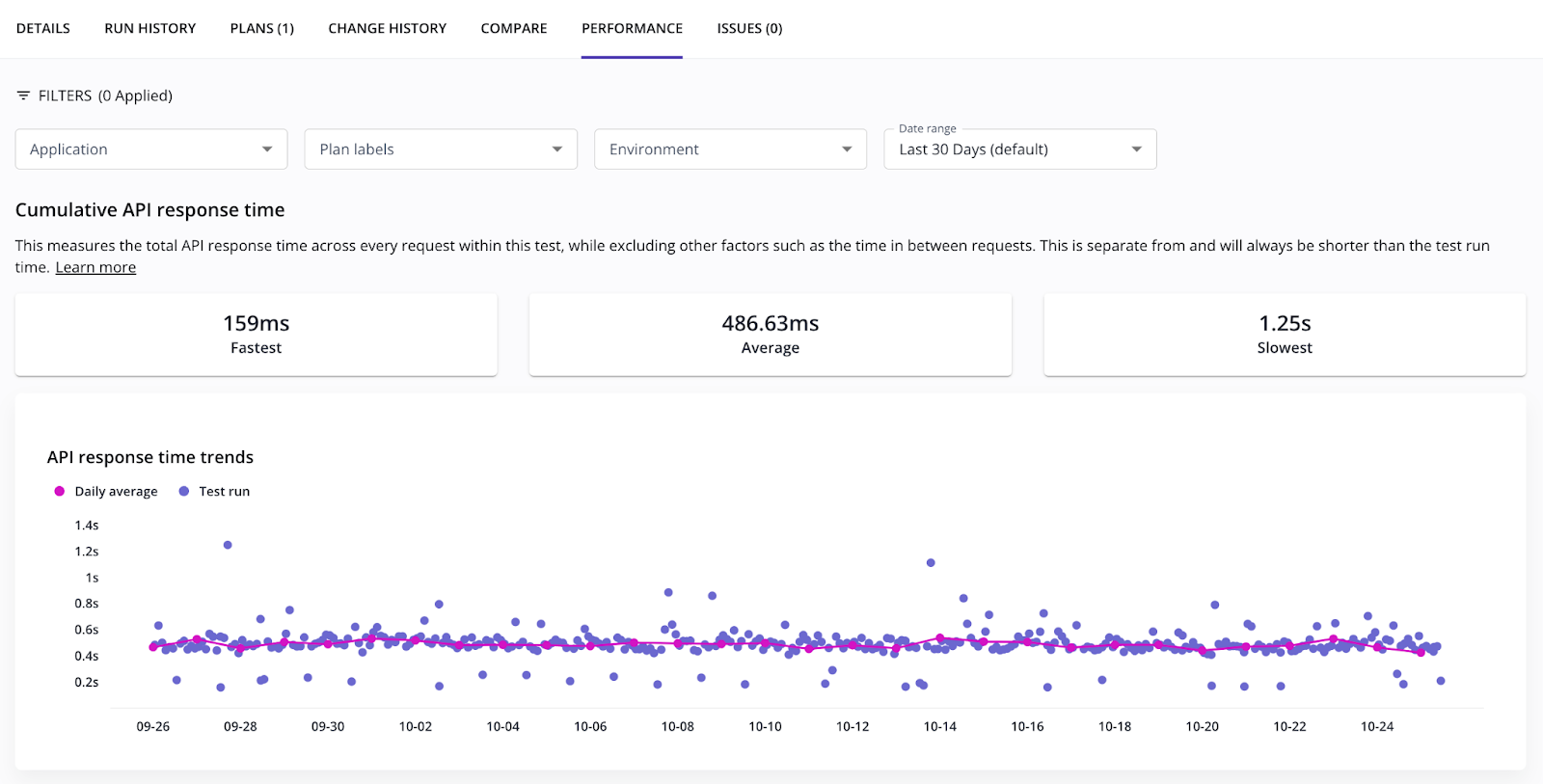 Application performance is one of the key ways consumers evaluate app quality - and if they’ll be repeat customers. With mabl’s new performance insights, quality professionals and developers can quickly start expanding their understanding of application performance by simply running their existing UI and API tests. The entire company will benefit from an enhanced understanding of the customer experience, while testers have another tool in their arsenal to advocate for the end-user and proactively improve app quality.

See how easy it is to quickly build up UI and API functional test coverage with mabl, and leverage these tests for performance monitoring and insights that gives your team confidence in the quality of your application. Sign up for a two week trial today.