How to setup CI/CD with AWS CodePipeline

Continuous Integration and Continuous Delivery (CI/CD) is the automation of a software delivery process—including the code integrations, the repository, testing, product builds, and deployment channels. CI/CD is a powerful technique and a penultimate cohesion goal for many development teams. Modern development teams like mabl integrate third-party CI/CD tools into their pipelines, others use tools provided by their cloud provider like AWS which are generally much more integrated into their application infrastructure.


AWS provides two cloud-computing CD services that can help ease your path toward the goal of CD automation: AWS CodePipeline, a continuous integration and CI and CD service, and AWS CodeDeploy, an automated application deployment service.

In this article, we provide an overview of how to integrate, configure, and use AWS CodePipeline in your development workflow. We also provide links to various resources that offer much more detail and avenues for exploration.

Why Use AWS CodePipeline?

AWS CodePipeline makes it much easier than other CI/CD tools to model, visualize, configure, and automate each of the steps of the process for building and releasing your software products. You can configure the pipeline with a graphical or command-line interface. 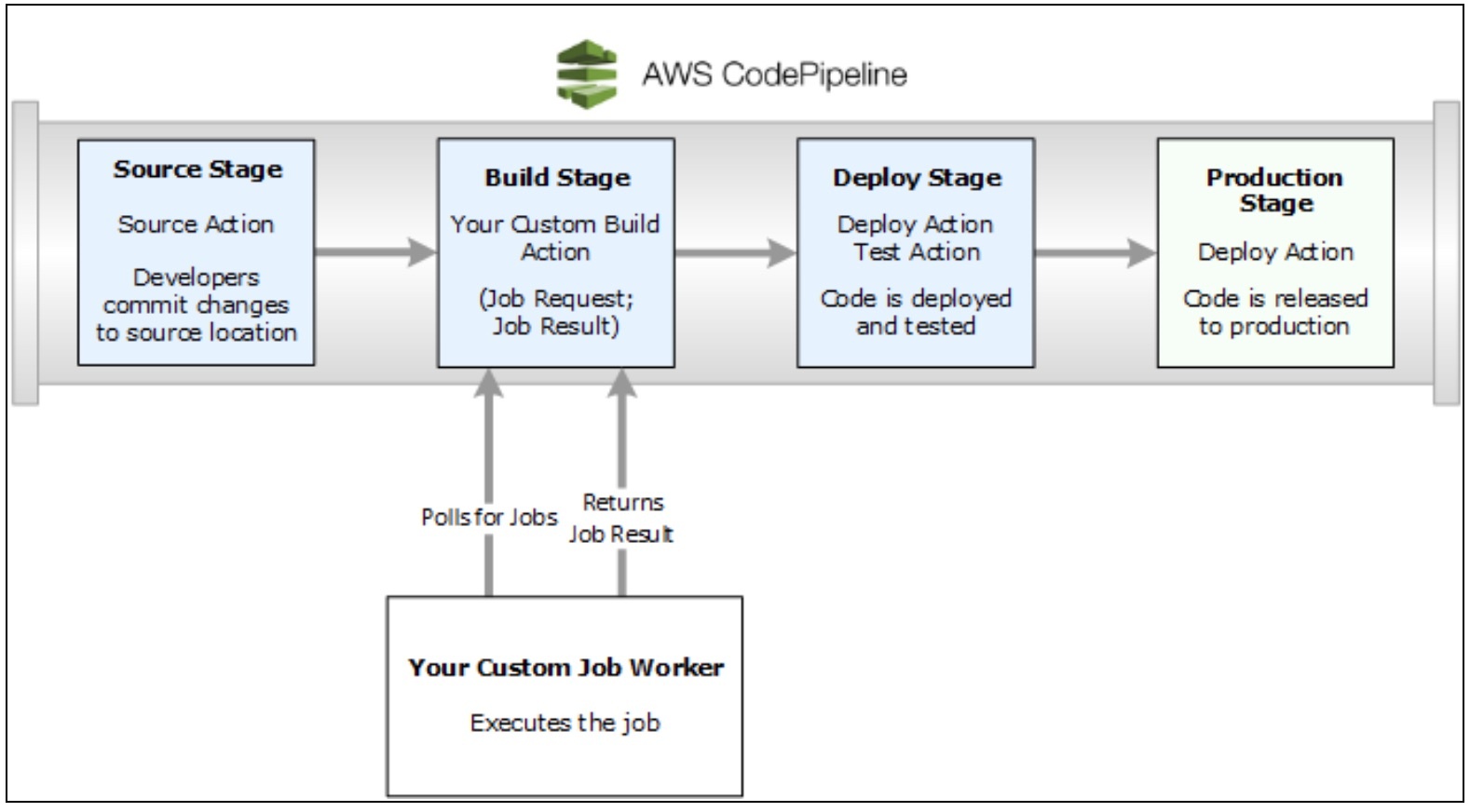 As you configure each stage, you specify which actions are performed on the code as it moves through CodePipeline.

The pipeline builds, tests, and deploys your code according to a release process model that you define. After activating your pipeline, CodePipeline automatically pushes any change to your code repository through the sets of actions that you’ve configured in each stage. Code changes are consistently and reliably run through a standardized process following each commit.

Optionally, you can set manual-approval checkpoints at the end of a stage to ensure that new changes don’t proceed further into the pipeline without authorization. Approvers can review and reject any defective updates and prevent any further progression down the pipeline. CodePipeline also stops your pipeline whenever an action fails, such as a unit test failure. Such automation gives you the ability to test more frequently, and catch bugs when they are small and easier to fix vs. downstream.

AWS provides a comprehensive pipeline toolset so that you can entirely automate your CodePipeline. For a full list of AWS services and third-party tools currently supported by AWS CodePipeline, see Product and Service Integrations with AWS CodePipeline.

With tighter cohesion and easier setup, you can soon get to the point at which your team improves the frequency, speed, and reliability of new feature delivery. You can build out an end-to-end solution with a variety of pre-built plugins for 3rd-party services such as GitHub, Jenkins, and BlazeMeter. In addition, you can integrate your own custom plugins into any CodePipeline stage.

Prerequisites for a CodePipeline

You’ll need to complete these steps before you can configure a pipeline in AWS:

A Simple Pipeline with the AWS CodeCommit Repository

The easiest way to explore AWS CodePipeline and determine its suitability for your development team is to configure a simple pipeline using the Create Pipeline wizard in the CodePipeline console. AWS provides a tutorial that guides you through a simple implementation of CodePipeline, in which you’ll deploy code held in an AWS CodeCommit repository into a single Amazon EC2 instance, using AWS CodeDeploy as the deployment service. You can opt for a versioned S3 bucket for the repository by following the guidance given in Create a Simple Pipeline (Amazon S3 Bucket).

Larger or more mature development teams may want to build and configure elaborate pipelines. Let’s look at configuring a four-stage pipeline that involves a GitHub repository for your source code, a Jenkins server for building the project, and an AWS CodeDeploy application to deploy builds into a staging server.

Before you can create a CodePipeline, you’ve got to configure the resources that will be put to use in the pipeline. If, for example, you want to use a GitHub repository to contain the source code, the repository must be ready prior to adding it to the pipeline. As part of setting up, the CodePipeline tutorial walks you through setting up Jenkins on an Amazon EC2 instance for demonstration purposes.

These are the major steps in creating a 4-stage pipeline with CodePipeline.

Set up the prerequisites

For Jenkins, CodePipeline requires you to install the plugin for Jenkins on any instance of Jenkins that you’ll be integrating with the pipeline. It’s best practice to configure a dedicated IAM user to provide permission access between your Jenkins project and CodePipeline. Indeed, the easiest way is to install Jenkins on an Amazon EC2 instance that will use an IAM instance role that you create for Jenkins integration—although you can still continue to run Jenkins locally if you prefer.

For Jenkins actions in the pipeline to successfully connect, you’ll need to configure proxy and firewall settings on the server or Amazon EC2 instance that will permit inbound connections to the port in use by your Jenkins project. Also, ensure that you configure Jenkins to authenticate users and enforce access control before you allow connections on those ports. For more information, see Securing Jenkins.

The prerequisite tasks include the following, which are detailed in the CodePipeline docs.

With your prerequisites in hand, you’re ready to create the pipeline using the Create Pipeline wizard. An AWS tutorial explains how to integrate a Jenkins instance with a pipeline. That tutorial directs you to download and use a code sample and walks you through a configuration that will convert a code sample from Haml to HTML.

Following successful completion of the wizard, the pipeline will start automatically and push the sample code through the pipeline. You can view progress and success and failure messages as the pipeline builds the Haml sample to HTML and deploys a web page to each of the Amazon EC2 instances in the AWS CodeDeploy deployment.

Here’s an example of input and output artifacts of actions in a pipeline: 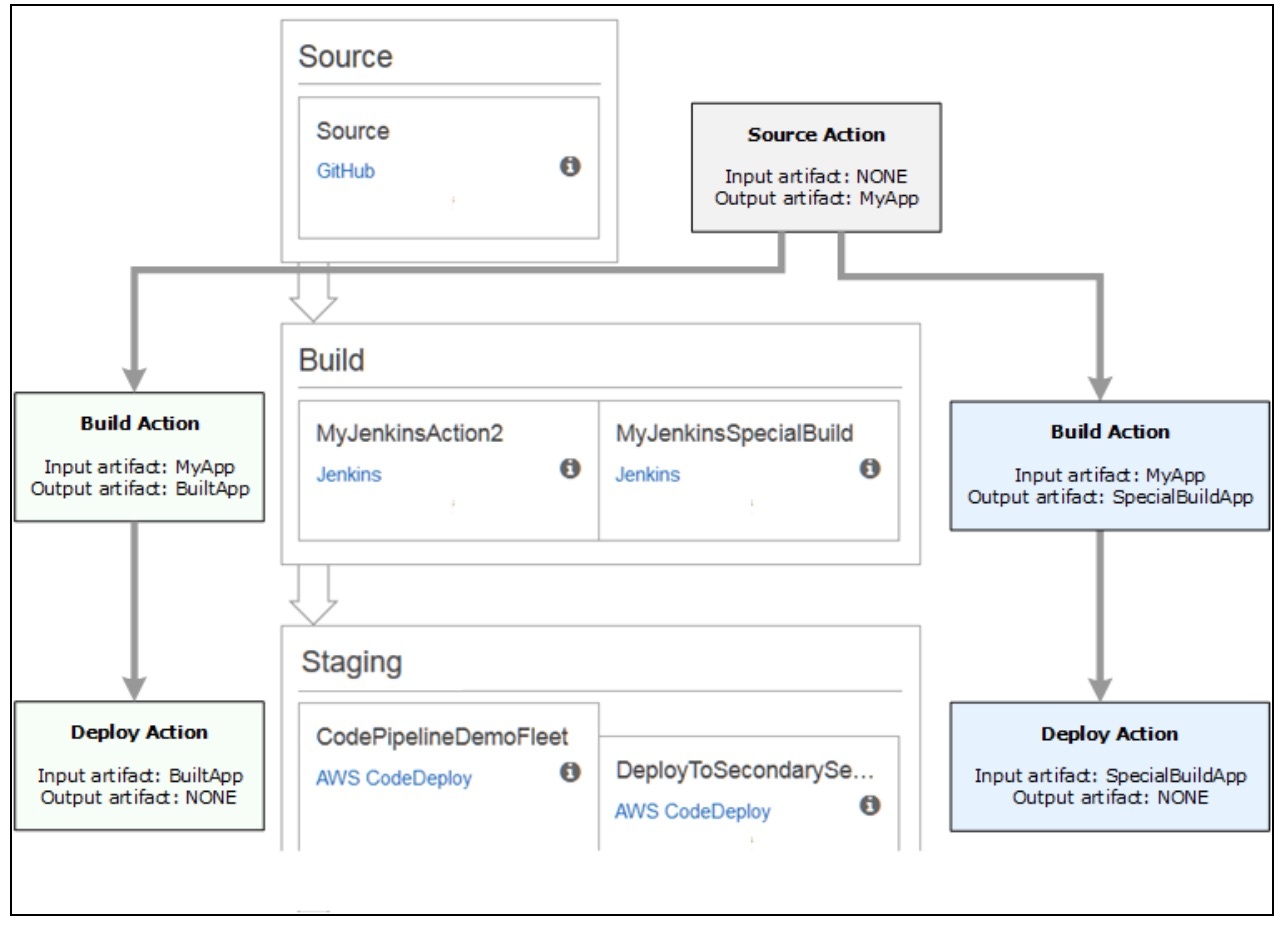 Add another stage to your pipeline

Next, you can add a test stage and insert a test action into that stage that will use the Jenkins test that is included in the sample. The test will determine if the web page has any content.

The tasks are detailed in the CodePipeline tutorial doc:

The pipeline view will now display the stages and actions in your pipeline and the state of the revision as it runs through the four stages. The time it takes for the pipeline to traverse all stages will depend primarily on the size of the artifacts, the complexity of your build, and the extent of the test actions.

Use the CodePipeline console or the command-line interface to view details about pipelines on your AWS account. View details for each pipeline, including which actions ran last, the status of a stage transition, failed actions, and other information. You can also view a history page that shows details for all recorded pipeline executions.

AWS CodePipeline provides many actions that help you configure build, test, and deployment resources for your automated release process. Your release process may include activities not found among the default actions—such as an internally-developed build process or a test suite. Using the AWS command-line interface, you can create a custom action and include it in your pipeline.

Invoke a Lambda Function in an AWS CodePipeline

AWS Lambda is a Amazon computing service by which you can run code without having to provision and manage servers. You can create Lambda functions and then add them as actions in your pipelines. Because Lambda allows you to write functions to perform almost any task, you can customize the way your pipeline works.

These are only a few of the ways in which you can use Lambda functions in a pipeline:

Here are some examples for implementing approval actions:

When you’re done exploring with any of these examples, delete those pipelines and any supporting resources, so that you don’t incur charges for continued use of them.  Delete the AWS CodeDeploy application, any corresponding Amazon EC2 instances, and also the Amazon S3 bucket that contains the artifacts. You may also want to delete any GitHub repositories if you won’t be using them.

When choosing the testing service for your CI/CD pipeline, try mabl out for free to see if it fits your needs!