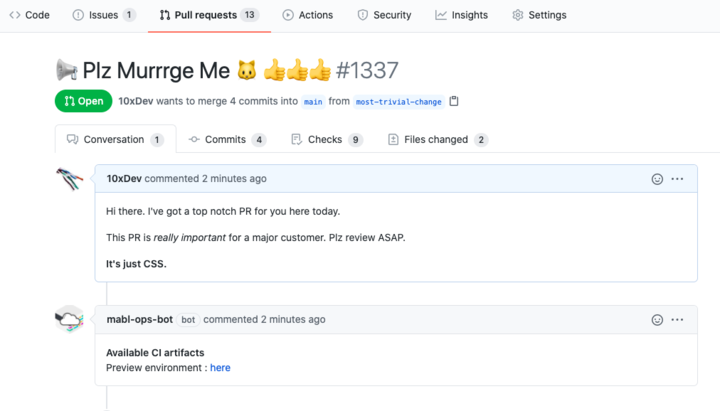 Software development teams around the globe are racing to keep pace with one another, but all encounter a common bottleneck - testing. They have found that traditional QA practices of functional testing release candidates are not cutting it in this new era of lightning fast development. Testing early and often to rapidly surface errors during development is the path to reach continuous delivery. And, when teams implement end-to-end testing pre-merge, they are able to solve problems early with minimal impact - saving time, money...and their team’s sanity.

The good news is that new tools and practices have emerged to enable testing much earlier in the pipeline. As developers begin to move beyond their local environment and share code changes for peer review, many modern teams are using preview environments to test these changes. A preview environment (also called ephemeral environment or review app) provides a low overhead, temporary environment where proposed changes can be evaluated by both people and automated tests.

The Power of the Preview

These single use, on-demand environments allow developers to test their changes in isolation, without breaking shared environments like staging or QA. They’re a great tool to test changes in your pull request pre-merge, allowing you to find issues when they are less expensive (we’re talking 10x less), proactively update tests so they don’t break later in the pipeline, and enable software development teams to become even more productive. Plus, with a unified test automation platform like mabl, you can integrate into major CI/CD tools like GitHub, Bitbucket, and GitLab to view full test result output directly into your pipeline.

See your changes in a preview environment

It’s time to unblock the DevOps cycle by building automated testing into the early stages of your dev pipeline. Leveraging helpful tools like preview environments paired with mabl’s intelligent test automation platform will help teams achieve the benefits of DevOps by resolving issues early - before they even make it to the master branch.