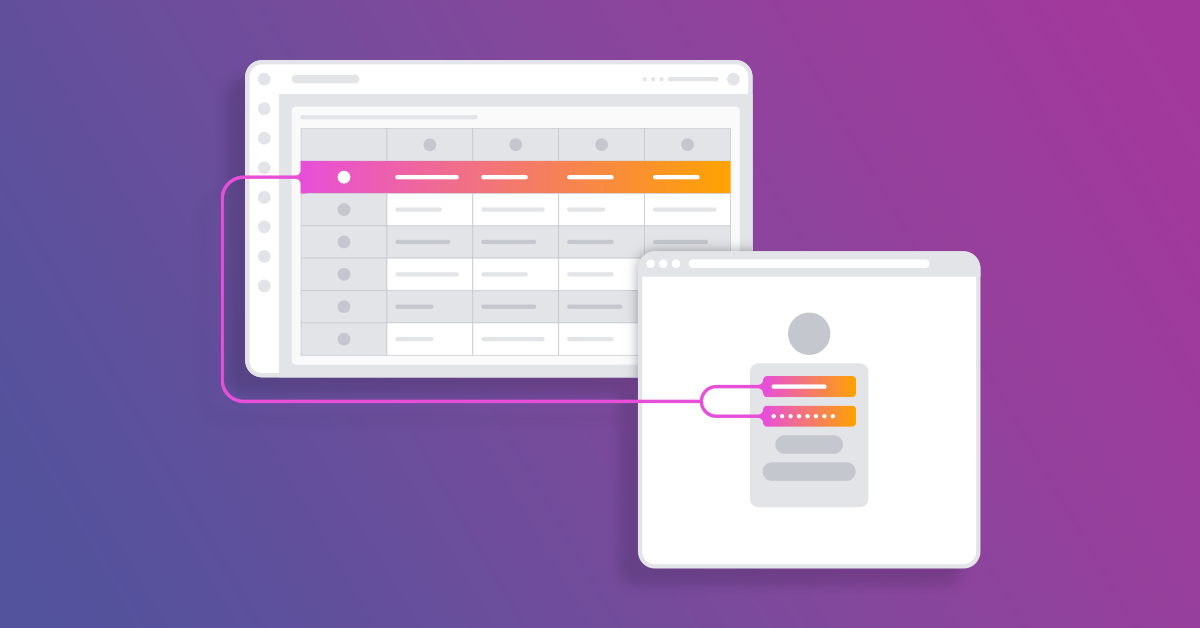 Data-driven testing (DDT) is one of the key tools for scaling test automation. Mabl enables teams to adopt DDT with support for not only datatables (known as DataTables in mabl), but also the ability to reuse automated UI and API tests across applications, deployments, and environments, as well as running these tests in parallel through its enterprise-grade test orchestration solution.

“Parallel runs and data-driven testing have helped our entire organization scale testing. DataTables in mabl make it easier to write a script once, then create all necessary iterations. For example, we might need to test the same content across multiple file types. With mabl, we can create and run those different tests in parallel, accelerating testing.” Gregory Goldshteyn, QA Manager at FOX Broadcasting Corporation

The Challenges of Fixing Defects at Scale

But to fully adopt quality engineering and DevOps, teams need a strategy to triage the greater number of defects discovered through a scaled automated testing strategy. Otherwise, they risk slowing down development pipelines as well as overwhelming both QA and developers. Fast, quality-centric development depends on scaling testing and associated quality processes.

Getting granular to debug defects quickly with mabl

Mabl has recently released expanded test creation and editing options to give users more granular control over the application, environment, URL, credentials, and DataTable scenario when opening a test in the mabl Trainer. These enhancements enable testers to quickly validate automated UI or API tests for very specific scenarios.

These highly detailed editing options make it much easier to scale testing across different page variations and environments. One popular example: managing localized web pages. Mabl allows quality teams to scale regression testing across localized website versions, even for global enterprises supporting users in dozens of languages. To further integrate testing across the development cycles for each variant, mabl supports different sets of credentials across environments. This means data-driven test tests can be run across preview, staging, and production deployments. Testing teams can scale testing with minimal effort and maximum observability.

When defects are found for a specific language in a specific environment - e.g., tests failed for Spanish in the preview environment - team members can open the mabl Trainer to replicate the defect. Mabl allows them to select the specific environment (Preview), which loads the appropriate credentials, and refine their search by the language DataTable scenario for Spanish.This allows developers and quality engineers to easily isolate the appropriate test and understand exactly where the failure occurred. This saves developers and testers alike valuable time when managing quality at scale. 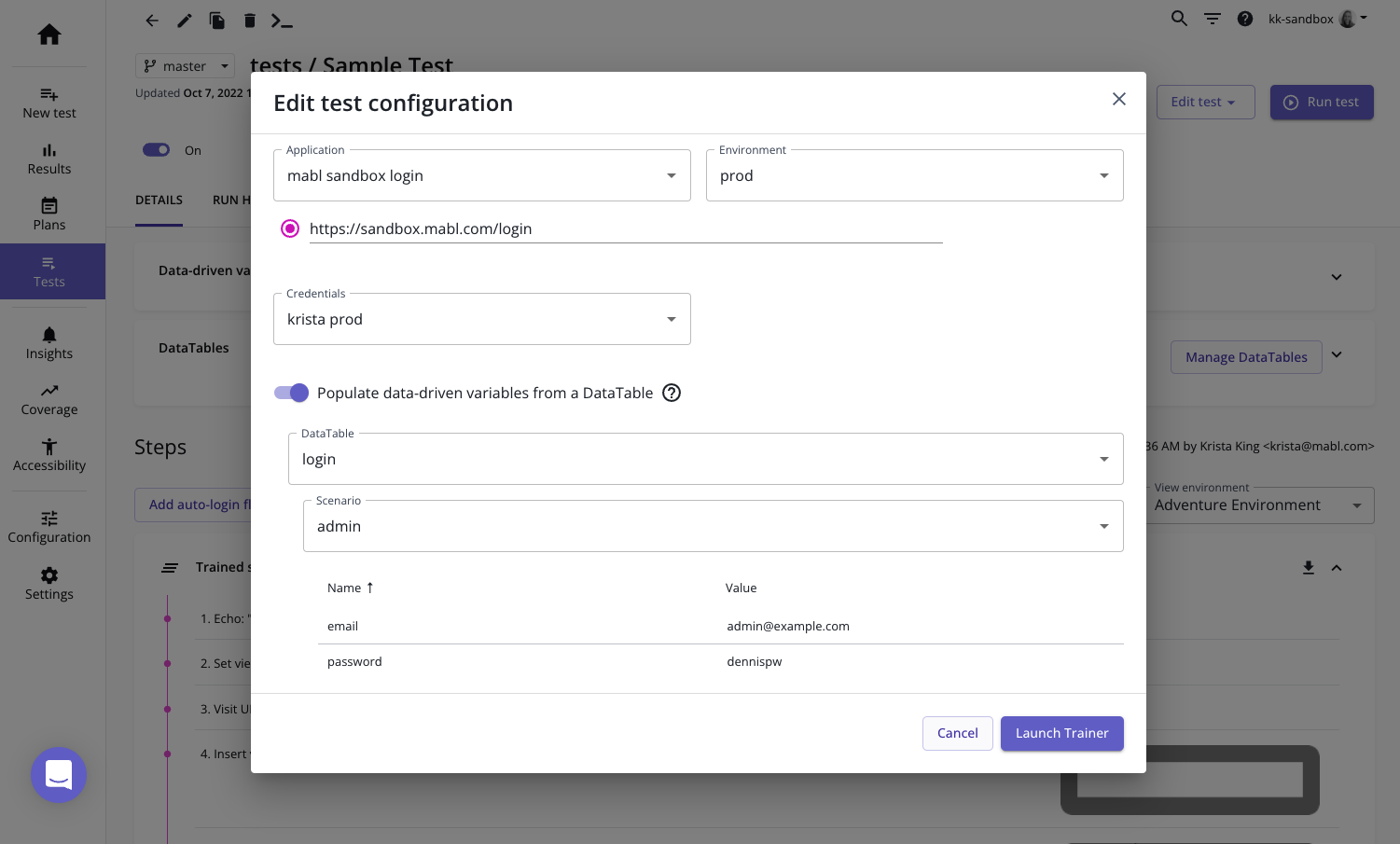 The expanded test creation and editing options appear when opening a specific test directly in the mabl Trainer. For those investigating failed tests after a completed test run with hundreds of iterations, multiple variable, and DataTable scenarios, there’s a new option to launch the mabl Trainer to the exact configuration and variable values used in the specific test run: 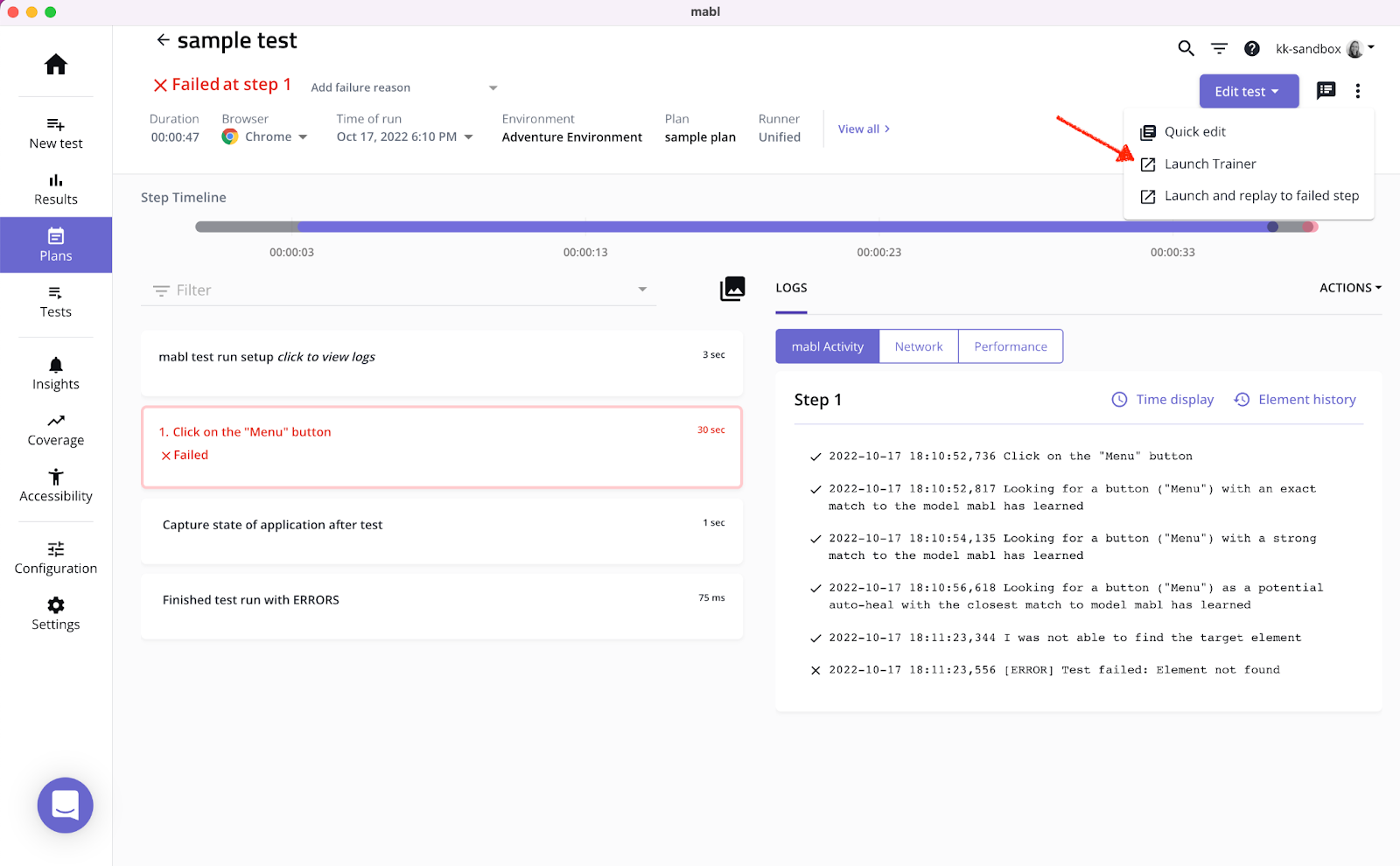 Once the mabl Trainer launches, users can navigate through the test steps to replicate a defect and inspect the variable and DataTable scenario configuration. 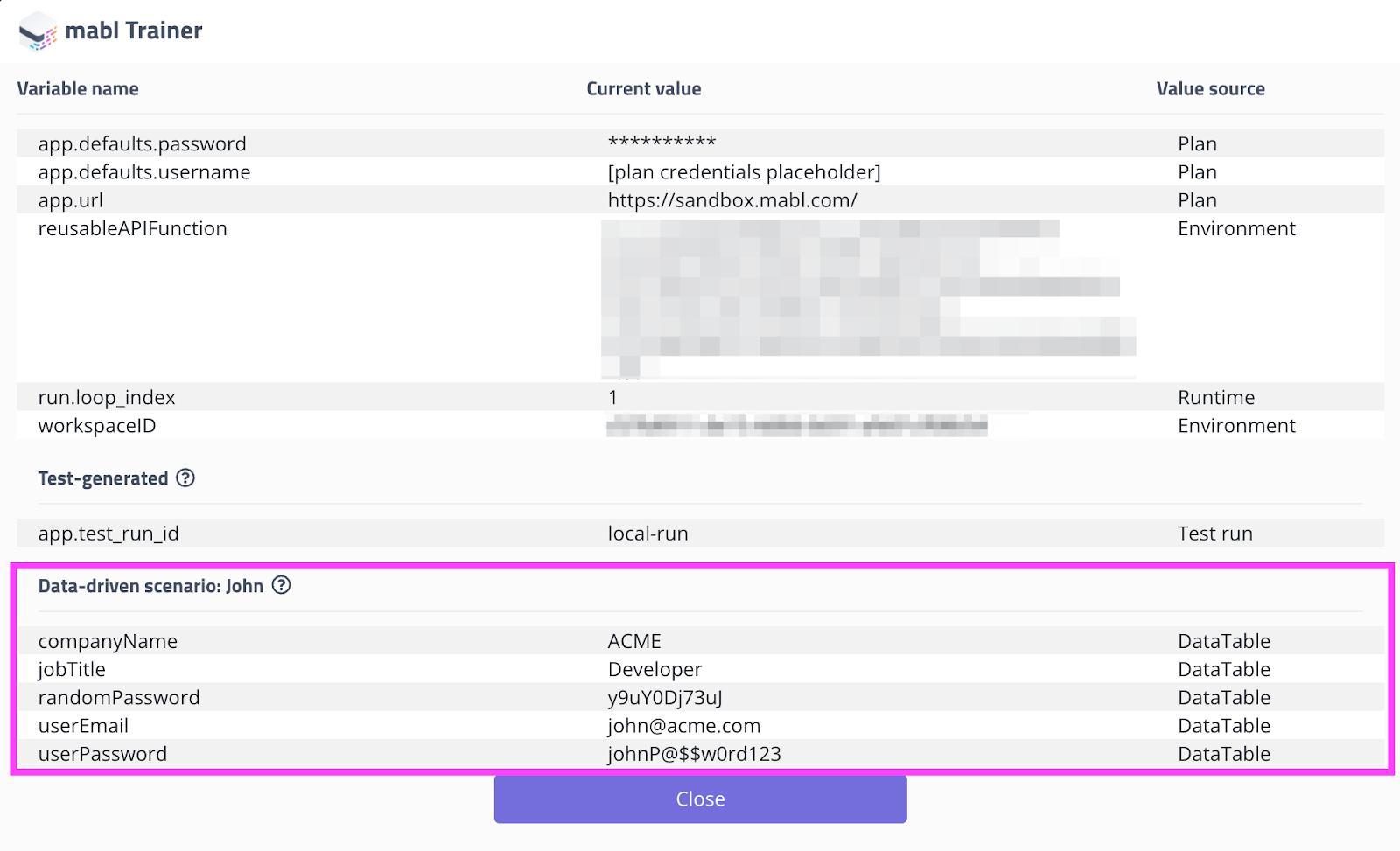 This new functionality enables testing teams to shorten the all-important time to defect resolution, an important factor in product velocity and cross-functional collaboration. Despite more organizations acknowledging the importance of continuous testing, few have implemented consistent processes for fixing defects without slowing development. With mabl, testers and developers are empowered to quickly investigate and triage test failures, reducing the amount of friction in development pipelines.

The reality is that no one likes dealing with failed tests and defects. But building a culture of quality demands a healthy view of failure that starts with better investigation and resolution processes. With mabl’s new data-driven testing features, quality teams can scale testing with confidence, knowing that our test automation platform makes it easy to identify and fix bugs.

See how your team can easily scale test automation for both UI and API tests with mabl by joining our free two week trial. With support for data-driven testing with unlimited parallel executions in the cloud, mabl makes it easy to quickly verify thousands of scenarios for your application, and then quickly debug defects.