The Benefits and Challenges of Pair Programming And Pair Testing

In the past, we talked about how we maximize our engineering velocity here at mabl, but now we're going to speak on a concept that some organizations view as a duplication of effort.

The concept of a code review is well known throughout the software industry. Perhaps less well known is pair programming, in which two developers work together on the same code. The aim is to write considerably higher quality code than what typically results from individual effort. A common approach in pair programming is to have one programmer write code while another programmer reviews the code—as it is being written.

In terms of formal roles, one programmer is the driver and the other is the observer or navigator. Less formally, two programmers can have an elaborate discussion as they analyze a single code base. Either of the duo should be able to write good code, and they both agree to avoid all distractions.

Pair programming is fully embraced by some companies—and entirely rejected by others. Since we are all human, there are at least some situations in which nearly all software programmers can benefit from pair programming. To many professionals, however, it seems to be generally an inefficient use of resources. Theoretically, two programmers can separately build different features or functions, which should result in twice the output of a single programmer or pair programmers. In reality, many teams report that their developers produce software that is 95% complete but doesn’t integrate well and is not shippable to customers. This is the reason why pair programming is given serious consideration in many software development organizations.

Much like pair programming, pair testing involves one person that does the testing—while another person observes, inquires, clarifies, records notes, and spots defects that would otherwise go unnoticed. Pair testing can be especially effective when one programmer sits together with a tester.

Pair testing is especially effective during development. Many problems will be found at such early explorations, and this early identification will likely result in a much easier solution. If possible, invite a business analyst to pair testing sessions, and this upstream triad is sure to reveal any lurking logic, design, usability, or functionality issues. Further downstream in the delivery pipeline, post-development pair testing collaboration can be valuable for improving development and testing practices. 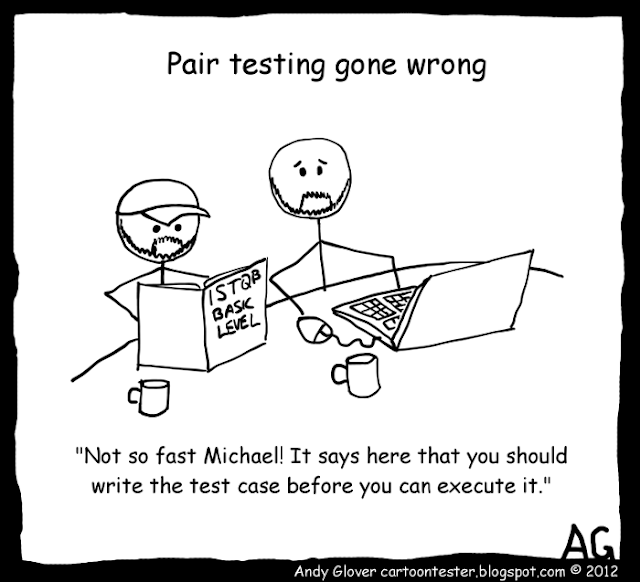 How to start with pair testing

Begin by selecting a code base that is modest in size. If it’s too large, the pair may be overwhelmed. If it’s too small, then there won’t be enough to test. Ideally, it’s best if the the tester and the developer have spent time working with each other previously. Prepare a mutually agreeable testing plan, then structure the meeting so that it includes time for each participant to use the software. It may require one or two sessions to get through. Then, reconvene and share feedback. Discuss what works well, what didn’t seem productive, and how pair testing can best into the development pipeline.

For pair testing to be valuable, you’ve got to produce communicable results. This can be done in various ways:

Pair testing is an excellent complement to regression and automated testing, and may result in significant time savings for smaller teams. It is not, of course, a replacement for other types of essential testing efforts. Some larger companies may find it difficult to integrate pair testing into an established development pipeline. A good approach is to wait for a phase transition—or the beginning of a new project—to introduce pair testing in a specific area.

Pair testing can be the most valuable in teams for which there is at least some tolerance for deeper thinking, exploration, and some creativity. It’s unnecessary to prepare test scripts, nor do you need GUI as a launch point for testing. Find two team members who are critical thinkers. It’s best if one is creative and the other has the capacity for disruption. As in many other aspects of human experience, two minds can be much more productive than one.