Released July 14, 2022 (EST) – mabl, the SaaS leader for intelligent test automation, today announced the release of the mabl application localized in Japanese as the latest investment to support the rapidly growing customer base in the region. The new localized UI is accompanied by additional investments in new team members, newly added live support in Japanese language and during local business hours, as well as expanded technical help documentation and mabl University self-paced learning resources in Japanese.

“Japanese companies are going through a period of significant change in their adoption of DevOps and Digital Transformation,” said mabl co-founder Izzy Azeri. “We’re proud to continue investing in mabl Japan’s incredible community of software innovators empowering them with these additional resources to gain the full benefits of low-code test automation throughout their development lifecycle.”

This latest enhancement to mabl’s intuitive user interface makes it even easier for a broader group of Japanese users to take advantage of low-code test automation. With the adoption of quality engineering practices and the speed of development increasing rapidly, software teams need solutions like mabl that provide an easy-to-use interface for creating and managing automated tests, that are enhanced with machine intelligence, and that can be embedded seamlessly into the development pipeline. 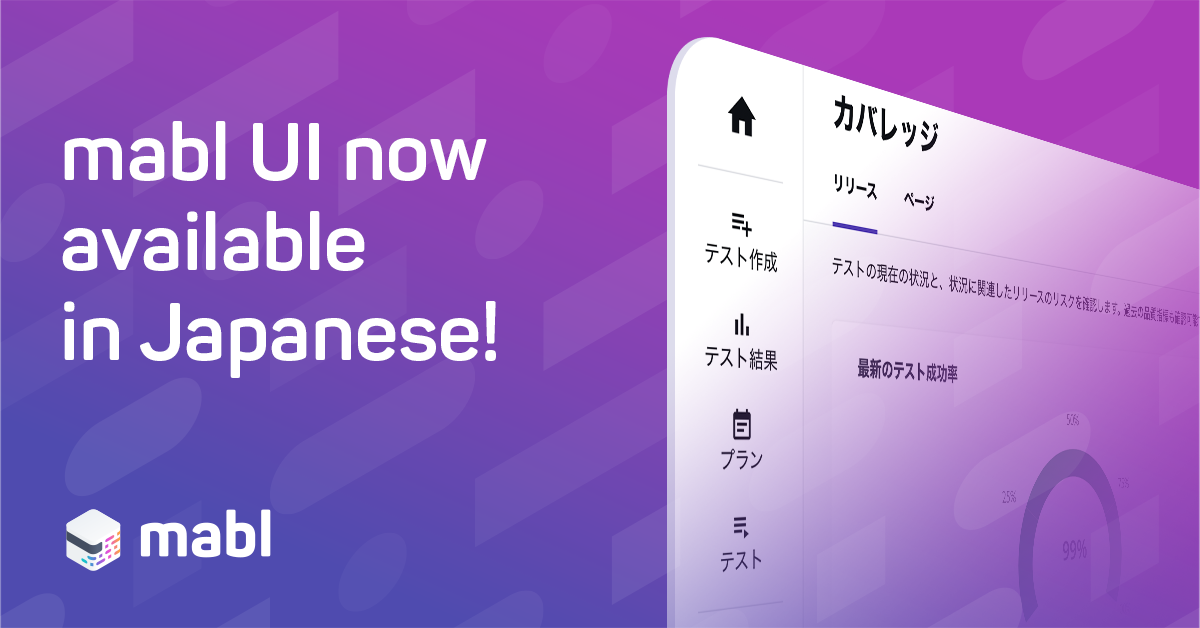 The mabl Japan community has grown by orders of magnitude in the last few years. The enthusiastic organic response to mabl’s intelligent test automation solution early on was followed by two consecutive years of triple-digit growth surpassing 200% in the last year alone, prompting the company to establish a local subsidiary, mabl, K.K..

Naoya Matsuo, Senior Engineer, Digital Innovation Development Department, Tokio Marine & Nichido Systems, Inc. said, “Tokio Marine & Nichido Systems is promoting test automation in order to maintain high quality while reducing the man-hours and effort required for application testing in several agile development projects. We chose mabl for its simplicity and developer experience, and now that the service is available in Japanese as well as English, we expect it to be even easier to use."

Takeshi Fukui of Note shared “NOTE's QA team has been using mabl since 2019 to automate E2E testing. Using mabl, developers can perform regression testing of core functionality prior to release and detect production failures before they occur. As a result, development time and costs are greatly reduced. Mabl has a great UX and is very user-friendly. We can easily create tests through the mabl Trainer. In addition, the AI-based automatic repair allows for stable releases with peace of mind in the event of problems. We hope that the release of the Japanese UI will make it easier for many of our members to use the platform and further increase their quality awareness.”

Ken Kakizaki, the General Manager of the Engineering & QA Team at the Group Corporate Management Division, GA technologies, an expert in website QA with over 20 years of experience in the field said

“mabl has lots of features and provides stable E2E testing, and I believe it is ‘the standard’ of test automation. We have tried different test automation solutions in the past, but there were very few that would support Japanese. With this new Japanese UI and support from mabl, we will be able to more effortlessly adopt more test automation features in the future.“

Mabl customers and trial users can gain early access to the localized mabl app today. To learn more about mabl or sign up for a free trial visit https://www.mabl.com/ja.